Three or four weeks ago, I got a mini bottle of Calvet Reserve Merlot Cabernet Sauvignon 2012 Bordeaux, or as the German’s call it, der Wein. I know absolutely nothing about wine other than if you drink 750 ml of it in 30 minutes, you’re going to have a good time.

I had been saving this bottle for a rainy day, so to speak, and it’s raining. Time to curl up with a bottle of Merlot and a good book, err, Kindle.

First task, let’s open this mofo. I did not have a corkscrew, but I had google! Google told me, I can do this without a corkscrew and Google is never wrong.

Attempt one involved the use of a knife to pry the cork out. I tried, but only managed to mangle the cork. 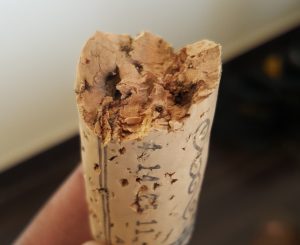 I also think I chipped the glass a little and am now worried about fine glass in my wine.

Attempt 2 involved using a shoe, I shit you not. Check out the video below if you don’t believe me.

Sadly this failed for me too. After 5 minutes of banging a wine bottle in a shoe against a wall, I realized I looked stupid, gave up and moved on to attempt 3… which worked perfectly.

This is a bit complicated, so I’ll write it in bullet form, stay with me.

Whew. That’s a lot of work.

Next task was to decant the wine. I had to actually do research for this. It is not a good sign when you have to do homework to get a buzz. There are many schools of thought about decanting Wein. Some say only in glass decanters, some say any container will do, others say, I shit you not, use a blender. I have none of the above, so I used a lunch box.

To all wine buffs, please do not kill me for the heresy I committed.

To everyone else, it was an utter waste of time. Apparently, wine tastes better if it is decanted for a bit. I wouldn’t know, it tasted the same before and after to me. Which leads me to the conclusion that I have not the palate for der Wein. On top of that, ich mag es nicht. Der Wein schmeckt nicht sehr gut.

I will probably catch heat for that too, but I honestly don’t care. I didn’t like it.

The conclusion is a question. Is wine like beer? You know, an acquired taste? Cuz I never liked beer when I started drinking, but now I can chug a metric ton of that swill. Well, I’m not about to let this, what I’m told is, good wine go to waste. I shall drink it till it’s finished because I paid good money for it. So don’t worry wine buffs, I’m not about to pour it down the drain.

PS: I do not own proper wine glasses, so this wine is lucky to be in *a* glass. So wine peeps, do not complain. It could have been worse. I could have used a ceramic mug.